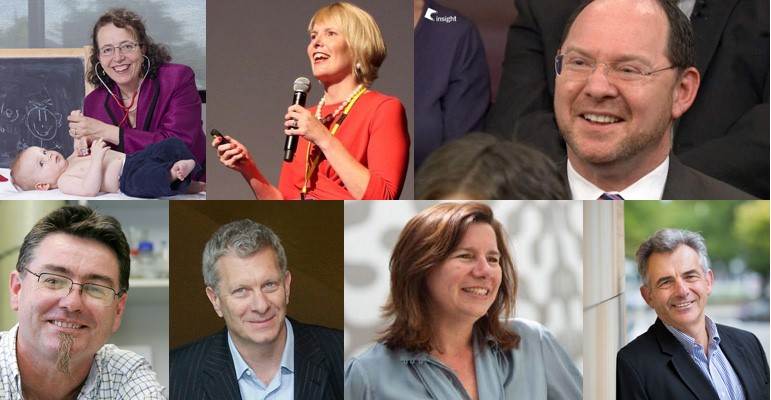 ‘Stem cell therapy’ in media stories could refer to treatments such as bone marrow transplants that have been saving lives for years, experimental treatments that have potential, or dodgy treatments from snake oil merchants that are downright dangerous.

Who better to explain and champion their science than the scientists themselves? Respected and engaging scientists are stepping up for evidence-based science and medicine, and injecting some much needed facts into media stories.

There is a danger that if scientists don’t step up and fill the void, the snake oil merchants will, encouraging desperate people to sign up locally or travel overseas for expensive, experimental treatments.

The following people have seen the value in talking to the media about stem cell therapies, sorting the hype from the hope:

Austin Health director of paediatrics and respected epilepsy researcher Ingrid Scheffer is not a stem cell scientist as such, but she spoke up when she saw stem cells being used to treat epilepsy in a young child. Ingrid told the Herald Sun newspaper that there wasn’t enough scientific evidence to pursue stem cell treatment.

“I would be concerned it could do harm,” she told the newspaper.

Mel Thomson appreciates the importance of legitimate therapies and treatments for diseases. She’s a microbiologist at Deakin University, but she also suffers from tumefactive MS, a very rare form of the disease. Mel understands how people can be seduced by stem cell treatments as a potential cure for their ailment. Commenting on treatments that aren’t backed by science, such as homeopathy, she told the Geelong Advertiser “you shouldn’t need a PhD in medical research to be able to sort through it all but sadly I think you actually do.” Mel has also shared her story and her ‘quack busting’ efforts with ABC Lateline and through Twitter.

John Rasko from Centenary Institute and the University of Sydney, and Martin Pera, Stem Cells Australia program leader, went on SBS’s Insight to defend the science behind stem cell treatments, highlighting that many types of stem cell therapy are still experimental and it’s not known, in many cases, whether they’re safe or effective.

They also reiterated the problems with having celebrity endorsements and individual testimonials of success with stem cell treatments, rather than reporting on the results of well design studies that openly document the full range of patient outcomes, for better or worse. Megan Munsie from Stem Cells Australia and the University of Melbourne was also in the audience and provided important background information to the show’s producers. You can watch this episode of Insight here.

Martin has also spoken to the media about the lack of monitoring and reporting on adverse events around ‘autologous’​ stem cell treatments (using a patient’s own stem cells) that are still experimental. In this article in the Sydney Morning Herald, Martin explains that Australia’s relaxed rules around this type of treatment opens up opportunities for ‘dodgy’ clinics that are in it for the money. “We want to see legitimate stem cell therapies tested in humans and succeed, there is no doubt about that, but there are proper channels to do that,” he says.

The Australian Academy of Science has also called for tighter regulations around stem cell therapies, which currently allow doctors to offer experimental stem cell treatments, provided they are using the patients’ own stem cells, usually obtained by liposuction. Last year, they put in a submission to the Therapeutic Goods Administration’s public consultation on stem cell treatments, as did the Foundation. You can download the Academy's submission here (pdf). Fellow Richard Harvey also spoke to the Australian Financial Review about Australia’s regulatory gaps.

The final word goes to Gordon Wallace from the ARC Centre of Excellence for Electromaterials Science at the University of Wollongong, who is developing 3D printers that can print with stem cells. Gordon often shares his science with the public through media interviews.

“There are undoubtedly safety and even ethical issues around these emerging technologies that we need to confront. What’s encouraging is that this generation of scientists that’s emerging is very familiar with those questions and keen to engage with all levels of the community to come up with the answers to those questions.

“I think as scientists, engineers and clinicians, we all have a role to play in engaging with the community to make sure we confront the issues out there and not let the technology develop in isolation.”
Share Tweet
Do you like this post?
Tweet
Read All News