The future of stem cells: tackling hype versus hope

Professor Melissa Little, in-coming Program Leader for Stem Cells Australia and President of the Australasian Society for Stem Cell Research, reflects on having a stem cell scientist as the Australian of the Year and the state of play for the field. 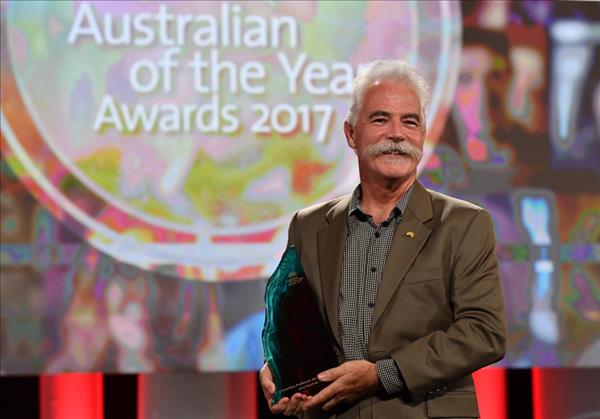 Controversy surrounds the link between Australian of the Year Alan Mackay Sim’s research and a Polish team who restored mobility for a paraplegic man. Photo: AAP/Mick Tsikas

For many people suffering from disabling conditions, such as Parkinson’s disease, spinal injury and paralysis, multiple sclerosis, macular degeneration, heart disease, renal failure and even cancer, announcements in the press around breakthroughs in stem cell research undoubtedly bring hope.

The challenge remains how to accurately communicate what is genuinely possible in terms of therapies and what we scientists hope might be possible but do not yet have strong evidence for.

Keeping the balance between hope and hype is a difficult one, particularly when there are vulnerable and suffering people relying on the hope medical research offers. As Australian of the Year, Emeritus Professor Alan Mackay-Sim, stated in his acceptance speech, there are now many clinical trials being performed in Australia and around the globe, to determine whether the delivery of certain types of cells, including some grown from stem cells, into the spinal column can allow patients with spinal cord injury to regain function.

For these individuals, even a small gain of function – such as being able to sense the touch of a loved one or regain bowel or bladder control - is a major advance. However, as yet there is no “stem cell” silver bullet.

The studies of Emeritus Professor Mackay-Sim into the neural (nerve) cells isolated from the nose have been used to study diseases such as schizophrenia. Using a particular cell type from the nose (“olfactory ensheathing cells”), his research has also demonstrated that delivering these cells into the spinal column of patients with profound spinal injury is likely to be safe.

Using the same cell type, others have reported a single case of a person who has regained limited function. While fabulous for that individual, the role played by the cells in the context of the particular injury and the importance of the intensive physical therapy that particular patient received is not yet clear. It’s also not clear whether the exact same type of cells were used in this isolated case and Mackay-Sim’s work, so we can’t really say whether one informed the other.

And stem cells that have shown promise can also cause complications. It was also reported a paraplegic woman developed a growth in her spine many years after an unsuccessful spinal stem cell treatment, also apparently using stem cells taken from the nose. Hence, more research to test these and other types of cells in well-run clinical trials is required to move from anecdote to safe and effective therapies.

Across the globe hundreds of clinical trials are underway to test various strategies to help people with spinal cord injury, including over 40 listed on the National Institutes of Health website using a wide variety of stem cell types. While the actions of the cells being introduced need to be better understood to improve the outcome, the type of injury, its cause and time since injury are also likely to be important considerations. All this requires more research (and thus more funding).

Alan Mackay-Sim’s work stems from a lifetime of curiosity-driven research into neuroscience. Following the appropriate framework of clinical trial, he had the passion and patience to test whether the cells he characterised from the nose would make a difference in clinical settings.

Of concern, outside the framework of controlled and monitored clinical trials, there are some companies and clinics offering expensive treatments without the evidence of safety or efficacy, and often with little clarity about what cells are actually being injected.

Such untested stem cell treatments are available, not only abroad and in seemingly “less regulated” overseas countries, but right here in Australia. This “unregulated” aspect of stem cell biology is of great concern for a number of reasons.

The practitioners involved have no evidence what they are delivering to patients will work or that it is safe, and yet they are charging patients thousands of dollars. While practitioners and patients alike may feel such interventions may be the only hope to alleviate their suffering, consequences can reach beyond risk to their health and financial loss.

Of critical importance, a patient that has pursued unproven interventions outside of a clinical trial will not be able to subsequently participate in a proper clinical trial, denying them a chance to be part of genuine scientific research.

So where are the clinical trials that patients want access to? Australia is a leader in the area of stem cell biology and has been for many decades, from pioneering work on in vitro fertilisation technology that ultimately led to the development of human stem cells able to form any cell type (pluripotent stem cells), to major contributions to our understanding of the stem cells of the blood which have driven improvements in bone marrow (blood stem cell) transplantation.

But this research is expensive. And while innovation is recognised by the major parties as a key driver for future success, their commitment to research funding in this country isn’t in line with their innovation focus. This is undoubtedly why Mackay-Sim intends to focus on the need for continued research support during the coming year and not on his own specific successes to date.

It was certainly heartwarming to see Alan recognised for his research, but to have the spotlight turned towards the potential of stem cell science and the researchers in this field also brings us “hope”.

This article was originally published on The Conversation. Read the original article.